But did we listen? Part 1

Of course not.   We researched retirement destinations in warm sunny climes for 2.5 years before our son Tom said "Belize". We, being the world travellers that we are said Believe what?  He said (sigh) "Belize, you know, the old British Honduras." Ahhhh, we said. I remember hearing that name, once, a really long time ago.  Isnt that an island?  "Sigh" he said.
Soooo, back to Google I want for another year and a half. All this time, as I am sweating and straining to get us retired sooner rather than later, in a warm and sunny clime, where we can afford to eat and still make occasional trips to see the grand babies. My beloved assumes I just have a new hobby. I Internet.  Back on track I start Googling Belize. Starts to sound interesting. I check average rainfall, average temps by the month. History of natural disasters. Are there Volcanoes? Earthquakes? Still sounds good. How about things to do and places to see? Yup.  Ahhh, what about crime. Amazing how many news sources are on line, even for a tiny country like Belize. I start reading the newspapers. And listening to the radio, on line. I am so full of facts and figure I just know this is going to work. I know I want to live in Belize. In the north. Where it rains a lot less and there are far fewer bugs. So I start trolling the real estate ads. Well, I would troll them if I could find them. This is 2006! Everything is on line! Where are all the houses?  Hmmm.
Early on in my research I was fortunate enough to discover a site called The Belize Forum. An absolute encyclopedia of information on Belize in an interactive form. This is where I was taught to Never ask a common question. Ever. Read the files. Every one of them. Often. And then lurk for a month or more praying that some other newbie would be rash enough to ask your question.  I learnt a whole lot from those folk. And I appreciate them for sharing. But they were Harsh!
The one thing that I didn't learn from them was Rent First. Sure they repeated it over and over and over. And I thought it was a really good idea for people with a lot of disposable income who could run around different areas of a foreign country for 6 months at a time.  We had to work for a living. So after much reading and studying I found a house in Corozal district For Sale By Owner and took a weeks vacation. The owner of the house invited us to stay in the house for the week and if we chose to buy it he would reimburse our air fare for the trip. How could this go wrong? Reasonably priced house, small town, Corozal district, just 10 minutes from the nearest large town with shopping and medical facility's, restaraunts and entertainment. Hah! Who needs to rent first?
The house was, ummm, ahhhh, unique. The circular stair to the 2nd floor had no railing. Just a really thick rope dangling down the center. Did I mention we are getting old? Pictures of broken hips were dancing thru my imagination. And the house was HOT. Did I mention we took this trip in August? If you can survive August in Belize you are fine. After an evening stroll around the small town, which was actually a village, a very small village. A very small developing nation type of village. We started getting a vibe like maybe we were not going to fit in all that well. Just a feeling. And in the morning as I stepped into the shower I discovered that there was only one faucet. That's right. No hot water, no need for the other handle. Cold shower. At 7 in the morning. 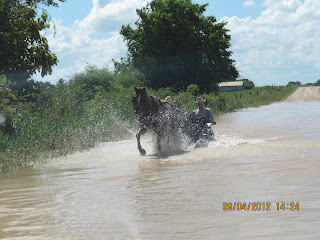 The homeowner dropped in with some fresh fruit just to laugh about the screams he heard a bit earlier and figure we has discovered the lack of hot water. I am not a morning person and I hate being cold. I wasn't ready to chuckle. I was ready to go shopping. I'm not a big shopper. I'm more of the ultimate window shopper. But I did want to see what the Big city of Corozal looked like and how prices compared to home and that sort of thing. It took 3 days to talk the man into taking us into town. 10 miles and 45 minutes later after crossing 2 hand crank ferrys in an Old Isuzu Rodeo, with everyone else in the village who needed to go to town, 9 men,we arrived in Corozal Town. 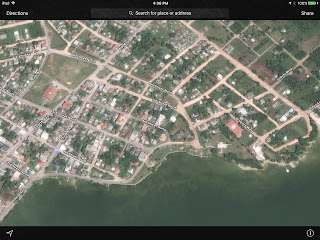